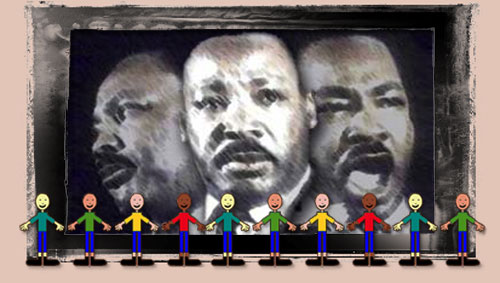 A Celebration of the Man and the Holiday

I have a dream today”

Each year on the third Monday of January schools, federal offices, post office and banks across America close as we celebrate the birth, the life and the dream of Dr. Martin Luther King, Jr.It is a time for the nation to remember the injustices that Dr. King fought. A time to remember his fight for the freedom, equality, and dignity of all races and peoples. A time to remember the message of change through nonviolence

Remember! Celebrate! Act!
A Day On, Not A Day Off!!

Rosa Parks
The “Mother” of the Civil Rights Movement and the Montgomery Bus Boycott.

The Emancipation Days of Respect
Three days established to promoting unity, respect and remembrance for those who have struggled and sacrificed to help change America’s unjust laws of racial segregation.

April 04, 2008: The 40th Anniversary of Dr. King’s Assassination
Despite the long road still ahead to realize King’s vision, America sees reason for optimism.

Print out our holdiay pictueres. All you’ll need to bring are the crayons!